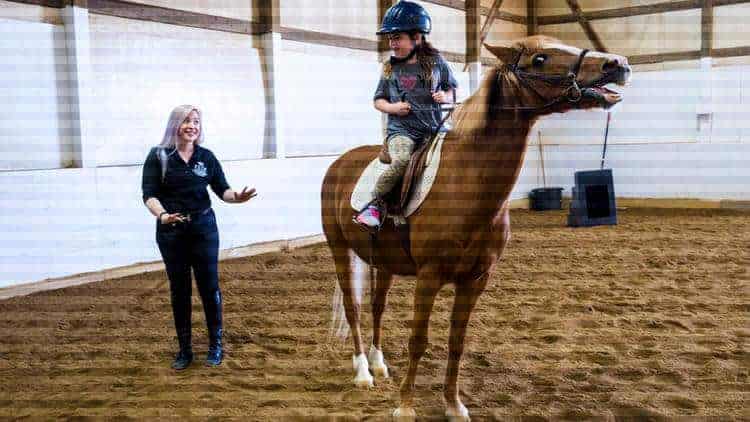 “We just don’t know whether they work or how much they work,” said Molly Crossman, a Yale University researcher who studies human and animal interactions.

There are few studies that examine emotional support animals, and the conclusions of these studies are mixed, she said. Also, the studies focus on dogs or horses, not other species. In her work, Crossman has found little evidence that animals can relieve anxiety or stress.

Still, those who work with animals designed to bring comfort to people struggling with mental health obstacles say people feel better after interacting with animals.

“People only recently have started to question if they work,” Crossman said. Using animals for emotional benefits or to relieve anxiety has “proliferated so quickly and so widely because we all have these experiences (with pets).”

After a spike in disturbances related to emotional support animals on planes and in airports — including a peacock barred from a flight earlier this year and passengers reporting bites by fellow travelers’ emotional support dogs — some airlines stiffened policies. The crackdown includes requiring proof of a pet’s training and vaccinations, and of the owner’s diagnosis with a therapist’s signature. In recent weeks, the U.S. Department of Transportation said it won’t penalize airlines if they demand such proof and will allow for “reasonable restrictions” of emotional support animals.

People can obtain an emotional support animal certification for their pet online for a fee, or from their own mental health provider. The designation allows the pet to travel on an airplane with its owner for free, and grants certain protections under housing laws. The designation differs from that of service animals like seeing-eye dogs, which have many other protections under the Americans With Disabilities Act.

In fact, Bufka said, psychologists don’t often “prescribe” emotional support animals, and many patients obtain certifications through the online cottage industry that has grown from their popularity. “The practices I know of strongly discourage clinicians from doing this.”

To do so ethically, the psychologist would have to be certain the animal is necessary, evaluate the patient with the animal and know about an animal’s behavior and training, said Bufka. “Instead, let’s talk about other things you could do (to relieve anxiety).”

Crossman said it can be difficult to study whether emotional support animals benefit mental health because the perceived benefit could simply be the act of comfort and not necessarily the animal itself, she said.

It’s important to continue to study emotional support animals, Crossman said, because while the pets seem harmless, there are risks. Besides allergy and cleanliness concerns when an animal is in a public place, it’s also unclear if animals used for therapeutic purposes aren’t “stressed out” by their role, she said.

And for patients with anxiety, Crossman said, an emotional support animal might be a good solution in the short term but, in the long run, could interfere with typical therapy methods that teach people how to deal with their problems head-on. “The point is it’s not like there is no cost or risk to this.”

But some who work with animals in therapeutic settings say they don’t need scores of studies to back up the proof they see every day.

Meggie Cramer said that, starting when she was young, she’s experienced healing from horses. She is a certified PATH instructor at Horsefeathers Therapeutic Riding in Lake Forest. PATH stands for Professional Association of Therapeutic Horsemanship. The instructors teach horseback riding as a form of therapy.

“Horses are emotional mirrors,” she said. “They can absorb and understand what you’re feeling without any hesitation.”

Cramer, an avid rider most of her life, said she has benefited from being with horses since she was 14, when her father died unexpectedly. “The first thing I did was call the owner of the barn. It was the only place I wanted to be.” That day, Cramer spent eight hours alongside a horse. “I sat in his stall. … He lay down and put his head in my lap.”

Now Cramer, who also is the coach of the Northwestern University equestrian team, works with clients with anxiety, depression and other afflictions. She said riding horses is a way to calm nerves or anger in a judgment-free space, and it teaches riders how to recognize their own emotions. Because horses respond to verbal and nonverbal cues, riders must focus on calming the horse, Cramer said. In doing that, they calm themselves, she said.

“There has always been an unscientific feeling within the overall horse community that (horses) have some sort of incredible aura and understanding, and they can be shockingly empathetic,” she said, adding that she sees the trend of therapy animals as the medical community learning “what everyone in the horse industry has known for centuries.”

Dogs have a similar “sixth sense,” said Tim Hetzner, president of Northbrook-based Lutheran Church Charities. The organization’s K-9 Ministries sends therapy dogs to a variety of places for those in need. The group sent dogs to visit students in Santa Fe, Texas, the same day as the fatal high school shooting there in May.

“Many times people will talk about what they’ve gone through to a dog before a human,” Hetzner said.

He recalled a visit to Newtown, Conn., days after the shooting at Sandy Hook Elementary School. A couple brought their young son, who had been in one of the classrooms and had seen shooting; he hadn’t talked since. The boy walked up to a dog, started petting him and eventually lay down on him, Hetzner said. Then, “he lifted up the dog’s ear and starts talking to him. For whatever reason, this little boy just didn’t feel comfortable talking to any human, but the dog was safe.”

Hetzner’s dogs are designated as therapy dogs, meaning they are trained to go to people to offer help, but they live in foster homes.

Hetzner said he worries that fraudulent emotional support animals will “hurt the (reputation of) legitimately trained animals.” The dogs in the K-9 Ministries go through a months-long training program before they start to work. The decade-old program now includes 130 dogs in 23 states.

“I’ve seen skeptics,” Hetzner said. “When they see what takes place, they get won over.”

Mayle, who said in the lawsuit that he is diagnosed...