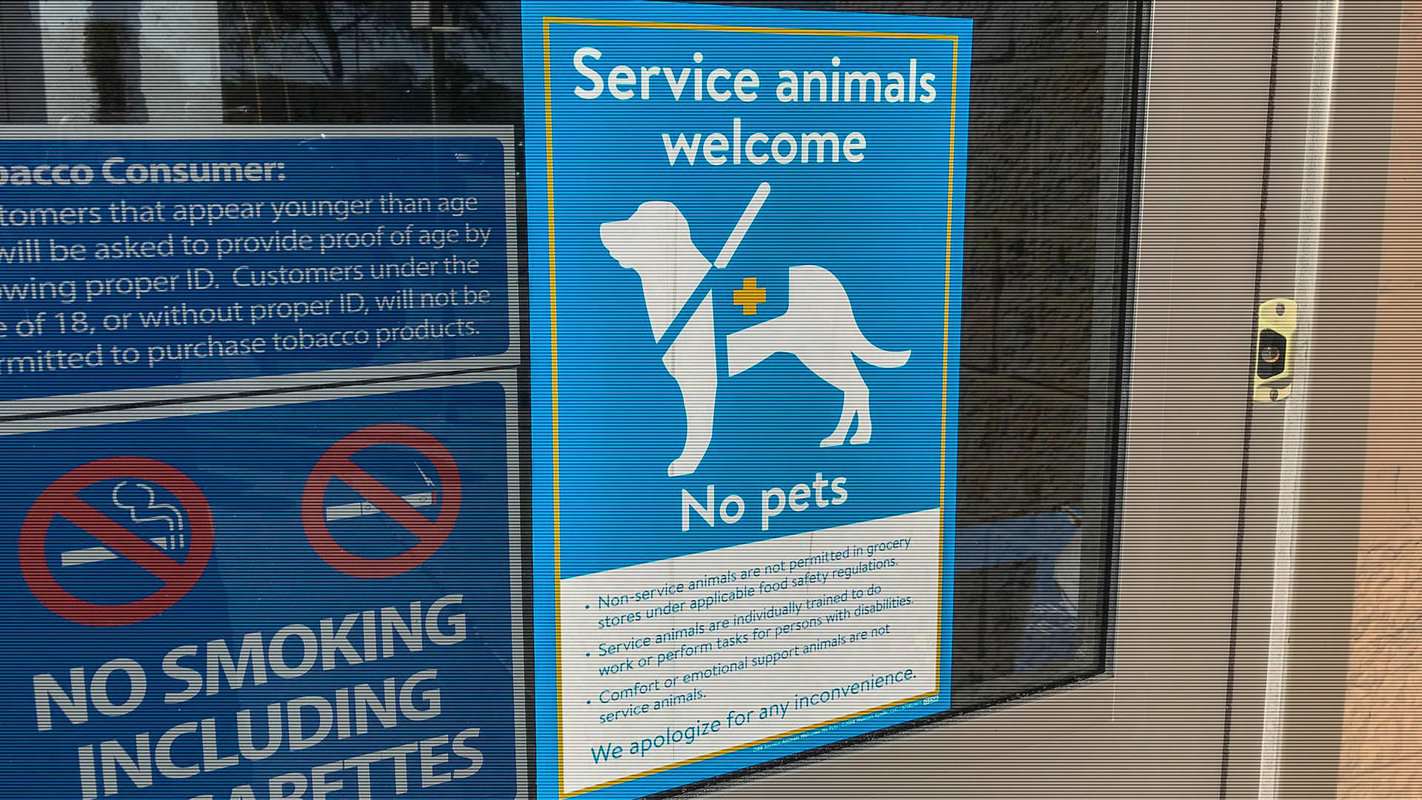 DISCLOSURE: In 2018, American Disability Rights applied for funding through the Walmart Foundation Community Grants program.  ADR’s applications were rejected at 19 different local stores by their managers.  A single Walmart store did approve a grant to ADR for $350 in 2018.  American Disability Rights hopes that our success with funding requests with the Walmart Foundation will be more successful in 2019.

Walmart, the nation’s No. 1 retailer, is tightening the leash on “comfort and emotional support animals.”

Throughout Brevard County, and the rest of the United States, Walmart is adding prominent signage saying “Service animals welcome. No Pets.”

Walmart added the signage on Sunday at its Titusville store and many customers were pleased.

“I have no problem with people that have legitimate problems that need service animals,” said Richard Claxton, who shops at the Titusville location.

“People have found loopholes and have taken advantage of a system,” Claxton said. “There needs to be some sort of regulation for what is considered and service dog and what is not.”

Walmart’s action comes as more companies are finding problems arising when people expand the definition of comfort and support animals and claim having them at their side is an important health benefit.

As people become more pet friendly, with many wanting to take a dog or cat almost everywhere that people go, companies are having to square that with others who might have allergies, or with some animals being unruly and even relieving themselves in a store.

Airlines have been particularly high profile when it comes to comfort and and emotional support animals on its aircraft.

Last year Delta Air Lines said it would be more strict with emotional support animals because of an 84 percent increase in incidents involving animals since 2016.

United Airlines also changed its policy after one passenger attempted to claim a peacock as an emotional animal.

A Walmart spokeswoman told FLORIDA TODAY the retailer’s policy isn’t changing but the new signage was simply to remind people its position on non-service animals in its stores.

“We just wanted to make a clarification,” said Tara Aston of Walmart. “Sometimes it’s a little murky what is, and isn’t, allowed when it comes to animals in our stores.”

Marc Bekoff, an animal behaviorist and author of the recent book Canine Confidential, said the crackdown by Walmart, airlines and other business are “probably a response to the abuse by people with emotional support pets.”

Bekoff, professor emeritus at the University of Colorado in Boulder, said he’ss not sure he agrees with Walmart’s policy because some people legitimately need emotional animals as support when they venture out in public. But, he adds, there are incidents where people take advantage of a policy when it comes to support animals.

“There needs to be system to validate what a legitimate support animal is,” Bekoff said.

For years, most people’s idea of service animals were dogs that assisted the blind, deaf, or those with visible mobility issues. Service dogs also are used for a number of  psychiatric disabilities, including PTSD, depression, anxiety, autism and more. But as research continues to provide evidence on the therapeutic benefit of pets, more and more people are attempting to take these pets into inappropriate places such as supermarkets, restaurants, and even church, often citing the animal as an “emotional support animal (ESA).”

While ESAs can provide therapeutic to non-disabling difficulties, they are protected under some housing and airline laws. However, they often have a lesser status than services and that has led to confusion among businesses on what animals are welcome and not.

Some emotional and comfort animals are donned in bright colored vests making their status noticeable. But it’s pretty easy to go online and purchase an official-looking emotional support vest making it difficult to distinguish between legitimate service animals and those that are there more to give their owners constant animal companionship.

Rarely are people asked for documentation from a physician on why the animal is necessary.

Chicago-based lecturer and clinical psychologist John Mayer said “support animals have been used inappropriately in the past and the permission given out, much like handicap parking passes, like Halloween candy.”

But when appropriate, emotional support animals do help people with anxiety, depression and PTSD, Mayer said.

“I have seen the relief of emotional stress from having such a companion in ways that therapy and therapists can’t,” Mayer said. “They provide love and devotion without question or consequence. Their calmness provides a ‘mindfulness’ experience for their adult partners in a way that is often more effective than isolated, personal techniques.”

Bekoff said one compromise might be to have people who legitimately need emotional or comfort pets to meet with a Walmart manager and try to get permission to bring the animal into the store.

“One would assume ,” Claxton said, “that someone that feels anxiety or needs for a service animal would utilize this feature.”

Mayle, who said in the lawsuit that he is diagnosed...

“We just don’t know whether they work or how much...