A couple summers ago, I took a trip to Disneyland. Getting off the It’s a Small World ride, I saw something that gave me serious pause: A tiny (and I mean tiny) chihuahua, wearing a service dog vest, and cowering while its owner yanked on its leash, trying to force the clearly terrified pooch onto one of the ride’s boats. The way the poor dog was quivering made one thing clear: This was a fake service dog.

I felt absolutely terrible seeing this, but not just for the dog, because its owner slapped a vest on it and forced it to go to Disneyland, a place where even the calmest of pups is likely to experience some serious sensory overload. It also sucked to witness this because I know how damaging fake service dogs are for people with disabilities who rely on actual service dogs. Now, a viral Tumblr post is explaining exactly why that is.

Lex Blanton suffers from chronic, debilitating migraines that classify legally as a disability. She runs the Faith and Defiance Tumblr blog, where she chronicles training and day-to-day life with her two migraine detection service dogs. In her post, she uses a couple of examples that highlight the differences between real and fake service dogs — differences we all recognize if we think about how we’ve seen dogs behave in public places.

“Fake service dogs create real problems. The ones who are impacted the most are the true service dog handlers who rely on their dogs every day to help mitigate their disability,” Blanton writes. “How would you feel if everywhere you went, you couldn’t make it ten feet in the door because people were asking you questions? Imagine how much time that would take out of your already hectic day.”

According to the Americans With Disabilities Act (ADA), service dogs must be “individually trained to do work or perform tasks for people with disabilities. Examples of such work or tasks include guiding people who are blind, alerting people who are deaf, pulling a wheelchair, alerting and protecting a person who is having a seizure, reminding a person with mental illness to take prescribed medications, calming a person with Post Traumatic Stress Disorder (PTSD) during an anxiety attack, or performing other duties. Service animals are working animals, not pets. The work or task a dog has been trained to provide must be directly related to the person’s disability.”

There are a ton of rules about how a service dog needs to be under the owner’s control at all times. A vest isn’t required, and there’s no testing or certification for service dogs. Owners are never required to prove they have a disability, but store owners and managers are allowed to ask two questions: whether a dog is a service dog and what task it’s trained to perform. That’s it.

And “emotional support” or “companion” dogs? Those don’t count.

“Dogs whose sole function is to provide comfort or emotional support do not qualify as service animals under the ADA,” according to the law, though those kinds of dogs have other protections under the Fair Housing Act and the Air Carrier Access Act. Those protect owners’ rights to animal-friendly housing and flights, but not to access to public businesses.

The bottom line here is that there are people whose service dogs help them live and function more easily. Using a fake service dog are not only a big, ableist slap in the face to those with real disabilities, but they actively  make things more difficult for people with disabilities. And using one makes you kind of a jerk. Leave your dog at home sometimes, and be thankful you can. 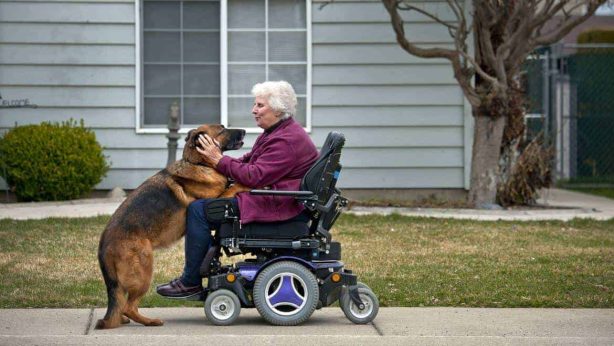 A new Washington law that allows businesses to question whether...