ADR COMMENT:   The courts previously ruled that Fair Housing Act regulations do not overturn local species limitation zoning ordinances.   From the information available in the story, it seems that the plaintiff never made a request for a reasonable accommodation with the local town and/or county prior to bringing the farm animals on the property.  If this is correct, then the case will likely be ruled in favor of the government.  If not, then the Doctor will have to explain why his patient needs multiple animals that violate zoning restrictions.   Legitimate emotional support animals are exclusively prescribed for mental health disabilities by licensed medical professionals.

From Kevin Murphy at the Watertown Daily Times:

MADISON — A town of Ixonia woman has taken her fight to federal court to keep the emotional support miniature goats and geese on her property that the town and Jefferson County said violates zoning ordinances.

The lawsuit Sara Manzke filed alleged the town and county have violated the Fair Housing Act which requires reasonable accommodations be made for individuals with physical disabilities.

Manzke, who has severe physical disabilities, is treating them with four miniature goats and five geese proscribed by her doctor as medical devices.

Her doctor believes Manzke will need the emotional support animals for the rest of her life.

In May 2017, Manzke and her fiancé, Joshua Pernat, bought a residence on County Highway E in the Pipersville area. The property is less than 0.91 acres and zoned community, which prohibits farm animals on less than 2 acres.

In July 2017, Manzke bought Nigerian dwarf goats and moved into the residence. She immediately began to experience significant relief from her disabilities which she attributed to caring for her goats.

A month later, a neighbor, Martine Koeppel, began to harass Manzke and Pernat, threatening to have her goats confiscated. Koeppel trespassed upon Manzel’s property and made false statements to other neighbors and governmental officials about the goats.

An anonymous call to town Clerk Nancy Zastrow referred to farm animals kept on the Manzke property and required some action taken “before pigs appear in the front yard.”

Matt Zangl, a county Zoning and Sanitation Department official, told Manzke she was in violation of zoning ordinances and told her to remove the animals or face a $200 daily fine.

However, the case was dropped after Manzke showed county and town officials documentation of her disability and evidence from her health care provider about her reliance on the emotional support animals.

In November 2017, Koeppel renewed her complaint by email and called the county expressing her outrage that no action had been taken.

Zangl subsequently renewed the zoning ordinance violation, directing Manzke to remove each emotional support animal by Dec. 13, 2017, or face a $200 daily fine or obtain a variance and conditional-use permit.

In April, Manzke’s attorney filed a complaint with the U.S. Department of Housing and Urban Development.

Meanwhile, Koeppel has continued to harass and threaten Manzke and defame her in false statements about the animals’ poor sanitation and noxious noise.

Manzke’s health has deteriorated during the past year and she has been forced to seek more treatment from health care providers as a result of the harassment and ongoing battle to save her emotional support animals.

A reporter’s call to Assistant Corporation Counsel Yelena Zarwell was referred to County Administrator Benjamin Wehmeier who did not return the call before deadline.

Town Chairman Perry Goetsch declined to comment on the suit.

Efforts to contact Koeppell, who is not a party to the suit, were unsuccessful.

Manzke’s suit seeks an injunction against the county from enforcing its zoning ordinance in ways which are prohibited under the Fair Housing Act and the Wisconsin Open Housing Law.

Earlier this year, United Airlines refused to allow a woman to board a flight with her emotional support peacock, saying it violated the carrier’s size and weight guidelines.

According to published reports:

Airlines have some flexibility to deny boarding unusual service animals such as snakes, ferrets, rodents and spiders and animals that post a threat to passenger safety.

However, federal guidelines specify that airlines must permit passengers with disabilities to board with trained service animals or emotional-support animals of many types, regardless of the animal’s potential to “offend or annoy” others on the plane.

United subsequently changed its support animal policy to require documents confirming that an emotional support animal is in good health and that it is properly trained for public settings, to avoid problems during the flight.

‘With Me Nearly Always’: Readers on Emotional Support Animals

Legitimate emotional support animals only have civil rights under rules... 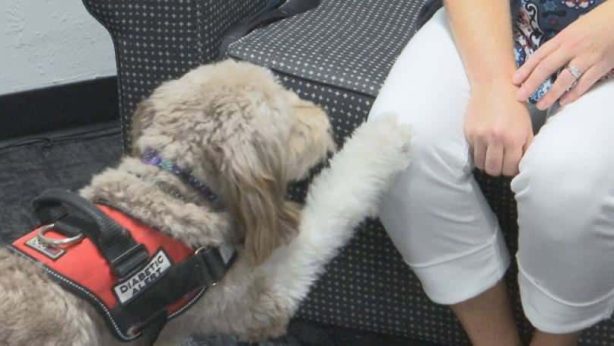 "Fair Housing has determined that universities do need to look...