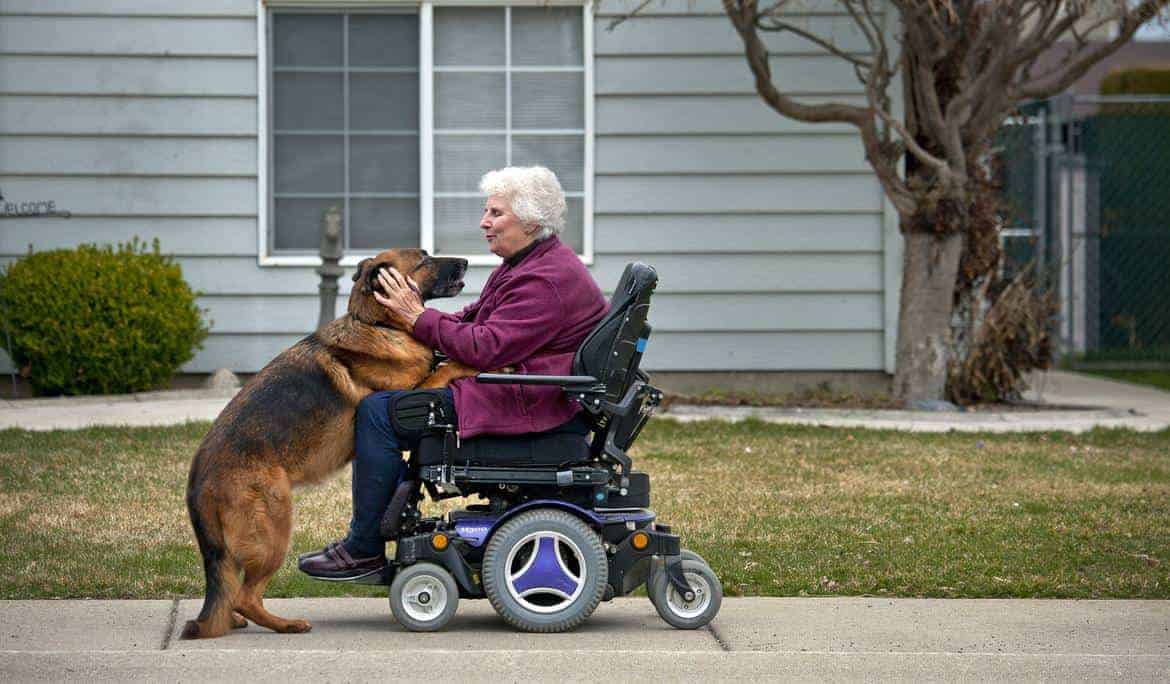 From The Spokesman Review

OLYMPIA – For the past 20 years, service dogs have helped Valley resident Sheryl Womble with day-to-day tasks like opening doors and picking things up off the floor, and even taking off her coat and gloves.

So when a dog wearing a “service animal” vest growled and lunged at her dog during a crowded community gathering several years ago, she knew the menacing dog was not a trained service animal. Womble, a quadriplegic, did the only thing she could.

She maneuvered her wheelchair to block the attacking dog. She got bit.

Womble trains service dogs and knows a vest, a badge, even a certificate that says a dog is a service animal doesn’t mean anything. “You can buy those on the internet,” she said.

To be a real service dog takes extensive training, at least a year and sometimes longer depending on what the dog will be doing to help its owner.

A new Washington law that allows businesses to question whether the animal accompanying a customer is a true service animal may provide some clarity and keep some people from trying to pass off their untrained pet, Womble and others said.

“It might help a little,” said Debbie Wing of LynnDee’s Grooming and Dog Training Center. “It might scare some people off” from trying to pass off their pet as a service animal just because they want to bring it into a store or restaurant, or take it with them on a bus or plane.

The law, which was signed late last month by Gov. Jay Inslee and takes effect Jan. 1, makes it a civil infraction with a penalty of as much as $500 to falsely claim an animal is a service animal in a “place of public accommodation.”

The law uses the federal Americans with Disabilities Act definition of a service animal, which covers only dogs and miniature horses, so other animals are automatically excluded. The animal must be trained to perform a specific task for a person with a physical, sensory, psychiatric or mental disability.

But the ADA does not set up a certification program for service animals, Wing said, so it’s easy for a person to make that claim and hard for a business to challenge it. Under the new law, a business employee or law enforcement officer can ask the owner two questions if they suspect a dog that is causing a disturbance isn’t a true service animal: Is the animal required because of a disability? What tasks is the animal trained to perform?

Deputy Mark Gregory, a spokesman for the Spokane County Sheriff’s Office, said the new law could provide some clarity for officers responding to complaints that come in from time to time. Whether it will result in more calls, or fewer, is hard to predict, but the department will sit down with legal advisers and human rights advocates to form a policy before briefing deputies on procedures, he said.

“This always has been a case of you don’t want to turn around and infringe on someone’s rights who is disabled and needs that assistance,” Gregory said. “As with any other law, we’re going to have to use common sense.”

Usually, law enforcement is called when a dog or another animal is creating a nuisance or disturbance in a store or a restaurant and the owner refuses to leave, claiming it’s a service animal.

The fact it’s creating a disturbance is almost a dead giveaway that it’s not a service animal, which is trained to ignore other animals and people, Wing said. If it’s on an extendable leash, or not on a leash at all, that’s another sign. Service animals are trained to be on a leash and 12 to 18 inches from their owner.

But the size or breed of a dog is not an indicator, she added. A 6-foot man who is diabetic could have a Chihuahua for a service animal, trained to detect by smell when he needs to take his insulin.

Also not an indicator: a vest on the dog or a badge the owner is wearing that says service animal. Those are available online, for a price, by filling out a form. “It’s a racket,” Wing said.

Buying a trained dog can cost thousands of dollars and require years on a waiting list, she said.

Training a service animal also takes time and money. Womble said owners start with basic obedience, and work toward specific tasks they need the dog to perform. They keep a log of training and tasks accomplished, and the instructors used. They refresh their training every year or so.

“You never stop working your dog,” she said.

Most people quit, because they either don’t have the time or money, or both. And really all they want is to take their pet with them somewhere, she said.

The law does not cover therapy dogs, which have separate training to go into schools, hospitals or other facilities to help people. Nor does it cover comfort or emotional support animals, terms that some people use for a wide variety of pets they might claim they need to calm their nerves.

Gregory wonders if that might be something the Legislature will have to consider in the future, because some returning veterans and others with post-traumatic stress disorder who have an emotional support animal, rather than a service dog, to help them cope with severe they might experience in aspects of daily life.

Although PTSD is recognized under the ADA, emotional animals are separate and not covered by the law.

Judges familiar with the ADA should know not to accept a simple certificate from some website, Womble said. They should ask to see the owner’s log with the times, dates and places where the training took place, and the instructors who provided it.

If the law cuts down on incidents with untrained dogs, there may be an added benefit to real service animals and their owners, who sometimes get critical looks or comments from people, Wing said.

Rep. Mike Steele, R-Chelan, the sponsor of the legislation, said the goal of the law is to balance the rights of disabled people to have the assistance they need with the rights of the rest of the public to be safe from misbehaving and possibly aggressive dogs. It’s designed to give businesses and police some options when there’s a problem.

“As long as (a dog) is not misbehaving and being disruptive, you’re not going to have a problem,” Steele said. “No one’s going to come after your dog if it’s by your side, behaving itself.”

For those with disabilities, a service dog means a more...